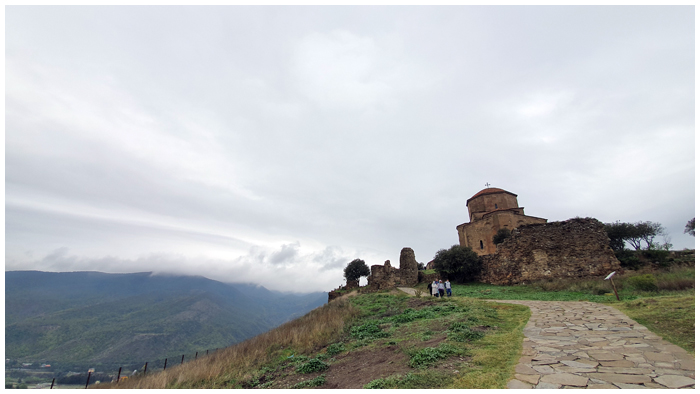 Day 1: Tbilisi
The present day offers us the opportunities to arrive at Tbilisi International airport, so that then the trip is organized to the principal city Tbilisi. This is going to be the investigational tour with visiting of Tsminda Sameba first. It is the very significant church of the country, known as Georgian Orthodox Church. At the same time it is seen being the very highest church here. Then there is going to be the trip along the historical region Metekhi, where the Assumption Church, located at the very top of the mountain. For the next destination we have taken the Rike Park and modern Bridge of Peace. For the next location the trip is going to be the Narikala fortress, which can be reached on the cable car. For the next point, guests have a chance to see the Botanical Garden, which is the location of sulfur springs. And in the end of the day we are going to have a walk along the Lively Shardeni street. This street is known for amazing and so cozy cafes! Also we have a chance to view the Sioni Cathedral. Night is offered in the hotel.

Day 2: Tbilisi - Kakheti - Telavi
Driving to Kakheti, the guests are the visitors of one of the most amazing regions of Georgia. At the same time it is seen as the popular producer of wine. Getting then, the region Telavi is visited, and it is said to be the location of the most fabulous wines of the country. Getting on, the Tsinandali estate is visited. It is the estate of the famous royal family Chavchavadze. Right here everyone is able to have a witness of interest maze, as well as seeing the collections of wines from Europe and the country itself. It is also followed by the survey of Batonis Tsikhe Fortress. Here there is a famous Khareba winery with local and mostly delicious wines. This is going to be the degustation of wine. At the same time here we are able to see the master class of national bread shoti cooking. Night is prepared in the hotel.

Day 3: Telavi - Signaghi - Tbilisi
For more sightseeing of the country, guests have a chance to visit Signaghi. Local drivers are going to have a view of the town of love and amazing style of architect. Locations of the town are extremely cozy. The next destination is seen in Bodbe Monastery. For now it is the monastery, where the famous apostle saint Nino is buried. That is why the territory is famous for the "Nino's water" spring. The spring is known to be able to heal. In the end of the day we are going to view David Gareja a rock-hewn monastery complex. It was created in the 6th century by St. David Garejeli. This is the person who used to be the thirteen Assyrian fathers. Night is spent in the hotel.

Day 4: Tbilisi - Gudauri - Tbilisi
Taking views of the country, the tour is made to Ananuri medieval fortress. It is located at the Zhinvali reservoir. Today it is identified as one of the most amazing structures from the point of view of architecture. In the past times it used to be the protective fort, as there were wars here. Then the route is organized to the height of 3000 m above the sea level. That is why it seems to be the perfect location for skating, skiing. Then the guests take a tour to Sour Waters of Vedza for seeing the Stepantsminda settlement. Basically this settlement is located at the Mount Kazbek, of 2170m above sea level. And at the top of the mountain there is an old Gergeti Trinity Church. Night is offered in the hotel, after exploration of the site followed by stories of Gergeti history.

Day 5: Tbilisi - Mtskheta - Kutaisi
We are glad to offer chances to get to see one of the famous locations of Georgia, Mtskheta. It is seen as the wonderful view of the unity of Aragvi and Mtkvari rivers. Then there is going to be the trip to Jvari Monastery and Svetitskhoveli Cathedral. The first location is identified as the church of the 11th century, seeming to be the first one. Later on, such a site as company Chateau Mukhrani is seen. Here traditions of the local people are united. At the same time it is one of the most visited locations of the country, as it offers the unity of stories, traditions, as well as details of the royal family. In Kutaisi night is planned in the hotel.

Day 6: Kutaisi - Martvili Canyon - Kinchkh Waterfall - Prometheus Cave - Kutaisi
Morning starts with the trip to Martvili Canyon and then to Okatse Canyon. The first canyon is famous for being created million years ago, being 40m deep and 2400m long. At the same time here in the west of the country invitees can take the boat trip along the territory. Concerning the second canyon, it is seen as one of the locations with the highest waterfall. This is the waterfall, known as Kinchkha. The group covers 20km from Kutaisi, to the very Prometheus Cave, considered to be the largest one in the country. The cave is famous for stalactites and stalagmites, as well as underground rivers. Night is taken in the hotel.

Day 7: Kutaisi - Borjomi
We are happy to note the following location, known as the historical and extremely natural site, Kutaisi. Along the way the trip is made to one of the UNESCO objects, Gelati Monastery. It is identified as one of picturesque places of our country. At the same time it is the symbol of Golden Age. Today the building is said to look like great blocks and lightly balanced construction. Basically the route is made to Motsameta Monastery, at the height of the River Tskhaltsitela-Red hill. Getting to the end site of the day, we arrive to Borjomi. This place is identified as the spa town, where curing springs are located. Night is prepared in the hotel.

Day 8: Borjomi - Vardzia - Uplistsikhe - Tbilisi
Invitees have breakfast and then start to Vardzia. It is made with an aim to view culture of the country, rich heritage of Javakheti as well. At the same time along the way it is going to be the visit of the monastery of St. Nino. And of course we have a will to get to Khertvisi Fortress, created in the 10th century, for guests having photos against these picturesque landscapes. As we get to the end location, you can find out that Vardzia is known to be the cave of unique creation, dating to the Golden Age (XII-XIII centuries). In the past times it helped people in flight to find safe location. The ancient building of Akhaltsikhe, Rabati Castle was created in the 13th century. At the same time this complex is identified as the home of various castles and religious places. As there is a need to get to Tbilisi, we have a ride of Uplistsikhe, the caves. It is known to be the cave town, as created being carved in the volcanic rock of Kvernaki ridge. It shows culture of the whole country. Night is offered in the hotel.

Day 9: Tbilisi - Airport
Morning starts with the transfer to airport.


Service does not include:
- Flights
- Visa fee
- Medical insurance